Current Issue Volume No: 1 Issue No: 2

This is an open-access article distributed under the terms of the Creative Commons Attribution License, which permits unrestricted use, distribution, and reproduction in any medium, provided the original author and source are credited.

The authors have declared that no competing interests exist.

Ofloxacin is a class of antibiotics, useful against the number of bacterial infections caused by Escherichia coli, Klebsiella, Citrobacter, Enterobacter, Proteus, Salmonella and Shigella species, Neisseriaceae, Yersinia enterocolitica, Haemophilus influenza, etc.1. Ofloxacin act by means of inhibiting bacterium's DNA 2. It is useful in the treatment of infections of the urethra, cervix, and urinary tract, infectious diarrhoea, cellulitis, chronic bronchitis, prostatitis, tuberculosis, pneumonia, otitis media, plague, etc.1, 3, 4. The side effects associated with the use of ofloxacin are diarrhoea, tendon rupture, numbness, headache, skin rash, vomiting, seizures, psychosis, etc. 1. It may increase the drug concentration in the blood i.e., theophylline, warfarin, cyclosporine, etc., and also increase the anticoagulant, cardiotoxicity and arrhythmias activity of acenocoumarol, barbiturate, etc. like drugs 4, 5. The major problems associated with ofloxacin has short biological half-life, and its bioavailability is more dependent upon the physiological condition of the GIT. It is soluble in acidic media but precipitates in alkaline media, which lead to loss of its solubility 4. Dissolution, absorption, and bioavailability of the pharmaceutical compound depend on the physical and chemical properties it 6. The Trivedi Effect®-Consciousness Energy Healing Treatment also called the Biofield Energy Healing Treatment has been significantly improved the physicochemical properties, isotopic abundance ratios, and bioavailability of pharmaceutical and nutraceutical compounds 7, 8, 9. The Trivedi Effect® is a natural and lone scientifically proven phenomenon, which involves that an expert individual can harness this inherently intelligent energy from the “Universe” and transfer to any object(s) on the planet via the possible mediation of neutrinos 10. The “Biofield Energy” in an electromagnetic energy field which exists surrounding all the living beings, generated by the continuous movement of the electrically charged particles, i.e., ions, cells, etc. inside the body. The process of the harness of energy and transmit the energy into any living and non-living object(s) is called Biofield Energy Healing Treatment, which has significant outcomes against various disease 11, 12, 13, 14. Such Biofield Energy is recommended by the National Institutes of Health/National Center for Complementary and Alternative Medicine (NIH/NCCAM) under the category of Complementary and Alternative Medicine (CAM) along with other therapies, medicines, and practices such as Ayurvedic medicine, homeopathy, traditional Chinese herbs and medicines, massage, acupressure, acupuncture, yoga, meditation, Reiki, hypnotherapy, Tai Chi, Qi Gong, aromatherapy, chiropractic/osteopathic manipulation, movement therapy, cranial-sacral therapy, applied prayer, etc. The CAM therapies have huge acceptance by the USA people with a beneficial effect in the treatment of various disease conditions 15, 16. Various scientific experimental studies reported the astounding capability of the Trivedi Effect®-Consciousness Energy Healing Treatment for its significant effect on the different objects in the field of materials science, agriculture science, microbiology, medical science 17, 18, 19, 20, 21, 22, 23, 24, etc.

The Trivedi Effect®-Consciousness Energy Healing Treatment could be an economical approach for the alteration of the physicochemical and thermal properties of ofloxacin for the designing of the better pharmaceuticals formulations. To understand the isotope effects, the stable isotope ratio analysis has various applications in different scientific fields 25, 26. Isotope ratio analysis can be performed by using the mass spectrometry techniques such as gas chromatography - mass spectrometry (GC-MS) and liquid chromatography - mass spectrometry (LC-MS) in low micromolar concentration with sufficient precision 25, 27. Thus, the LC-MS and GC-MS were used to evaluate the impact of the Trivedi Effect® - Consciousness Energy Healing Treatment on the structural properties and isotopic abundance ratio analysis of PM+1/PM (2H/1H or 13C/12C or 15N/14N or 17O/16O) and PM+2/PM (18O/16O) in treated ofloxacin compared to the control sample.

The ofloxacin powder sample was purchased from Sigma Aldrich, USA and remaining reagents used during the experiments were purchased in India.

The ofloxacin powder sample was equally divided into two parts and termed as the control and Biofield Energy Treated sample. The treated ofloxacin was received the Trivedi Effect®-Consciousness Energy Healing Treatment remotely under standard laboratory conditions for 3 minutes by the popular Biofield Energy Healer, Mahendra Kumar Trivedi, USA. The Biofield Energy Treatment was provided through the healer’s unique energy transmission process. However, the control ofloxacin received treatment from a “sham” healer who did not have any knowledge about the Trivedi Effect®-Consciousness Energy Healing Treatment. After the treatment both the samples were kept in sealed conditions and analyzed using sophisticated analytical techniques.

The LC-MS analysis of the ofloxacin samples was carried out with the help of LC-MS/MS ThermoFisher Scientific (USA), fitted out with an ion trap detector connected with a triple-stage quadrupole mass spectrometer. A reversed-phase Thermo Scientific Synchronis C18 (Length-250 mm X ID 4.6 mm X 5 micron) column was used maintained at 25˚C. 10 µL of ofloxacin solution in methanol was injected. The analyte was eluted in gradient phase using 0.1% formic acid in water (mobile phase A) and acetonitrile (mobile phase B) pumped at a constant flow rate of 0.6 mL/min for 10 min. Peaks were monitored at 254 nm using the PDA detector. The Electrospray ionization (+ve) technique was used in the mass spectrometric analysis. The total ion chromatogram and mass spectrum of the individual peak (appeared in LC-MS) were recorded. The natural abundance of each isotope (C, O, H, and N) can be predicted from the peak 26, 28, 29, 30.

The GC-MS of the ofloxacin samples were analyzed with the help of Perkin Elmer Gas chromatograph equipped with a PE-5MS (30M x 250 micros x 0.250 microns) capillary column and coupled to a single quadrupole mass detector was operated with a positive electron impact (EI) ionization mode. The Oven temperature was programmed from 75°C (5 min hold) to 280°C (14 min hold) @ 10°C /min (total run time 40 min). The diluent for the sample preparation was acetonitrile in water.

The % change in the LC-MS and GC-MS based isotopic abundance ratios (PM+1/PM and PM+2/PM) for the control and Biofield Energy Treated ofloxacin was calculated.

Figure 1. Liquid chromatograms of the control and treated ofloxacin. 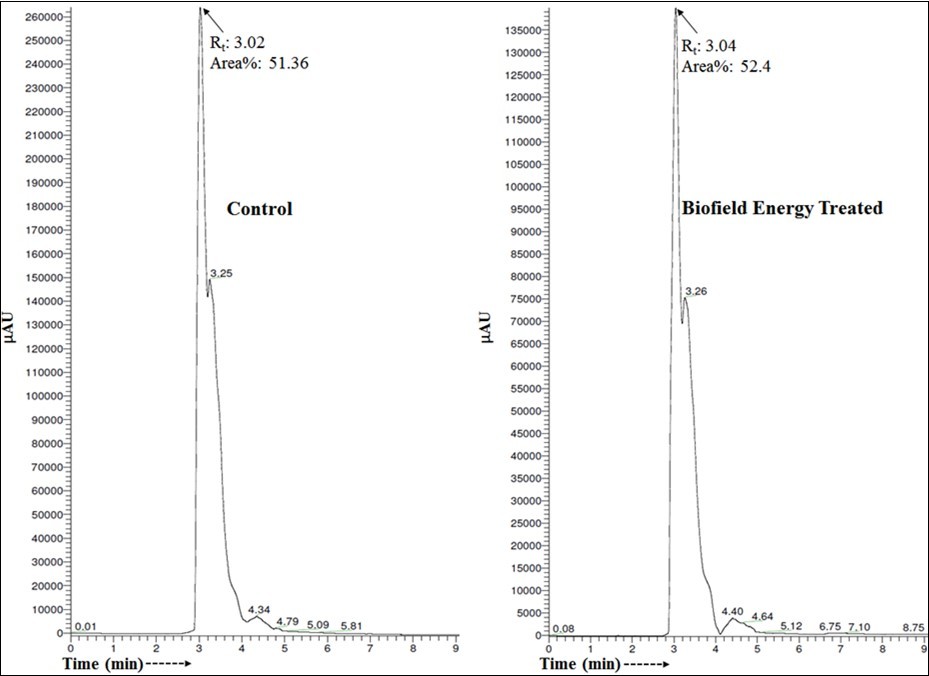 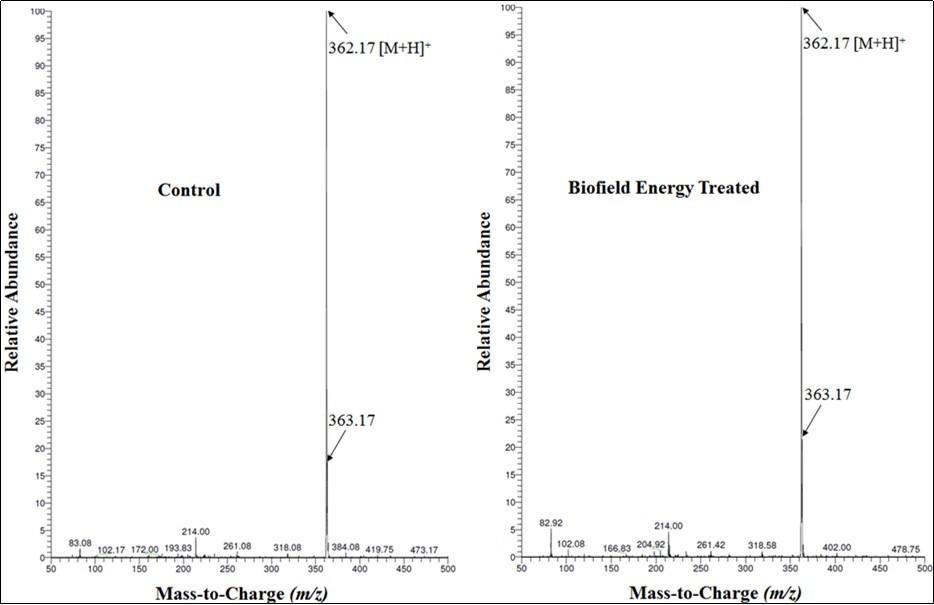 Figure 3. Proposed fragmentation pattern of ofloxacin with respect to the mass spectra. 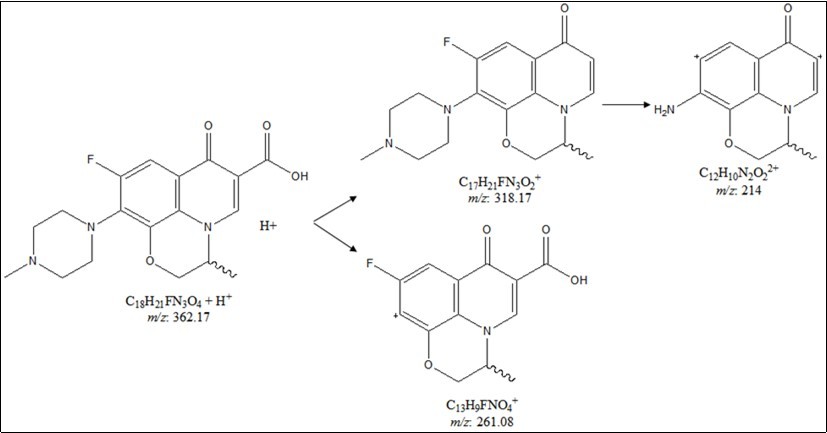 The mass spectra of both the samples showed the mass of the molecular ion peak (M+H)+ at m/z 362.17 (calculated for C18H21FN3O4+, 362.15) with relative intensity of 100%. The theoretical calculation of PM+1 for ofloxacin was presented as below:

From the above calculation, it has been found that 13C and 15N have major contribution to m/z 363.17. The calculated isotopic abundance is close to the experimental observed value (Table 1).

The LC-MS based isotopic abundance ratio of PM+1/PM in the Biofield Energy Treated ofloxacin was significantly increased by 22.43% compared with the control sample (Table 1). Thus,13C, 2H, 15N, and17O contributions from (C18H21FN3O4)+ to m/z 363.17 in the treated ofloxacin were significantly increased compared with the control sample.

The GC-MS chromatograms showed that the Rt of the Biofield Energy Treated ofloxacin (23.9 minutes) was altered compared to the control sample (22.93 minutes). The peak area% of treated ofloxacin (86.41%) was increased by 1.72% compared to the control sample (84.95%). The dehydrated molecular ion peak at m/z 317 (calculated for C17H21FN3O2+, 317.15) was observed in the control (Figure 4) and treated (Figure 5) ofloxacin mass spectra. The theoretical calculation of PM+1 for ofloxacin was presented as below:

From the above calculation, it has been found that 13C and 15N have a major contribution towards the m/z 318.

Similarly, the theoretical calculation of PM+2 for ofloxacin was presented as below:

From the above calculation, it has been found that 18O have major contribution to m/z 319. The calculated isotopic abundance is close to the experimental observed value (Table 2).

Figure 4. The GC-MS chromatogram and mass spectra of the control ofloxacin. 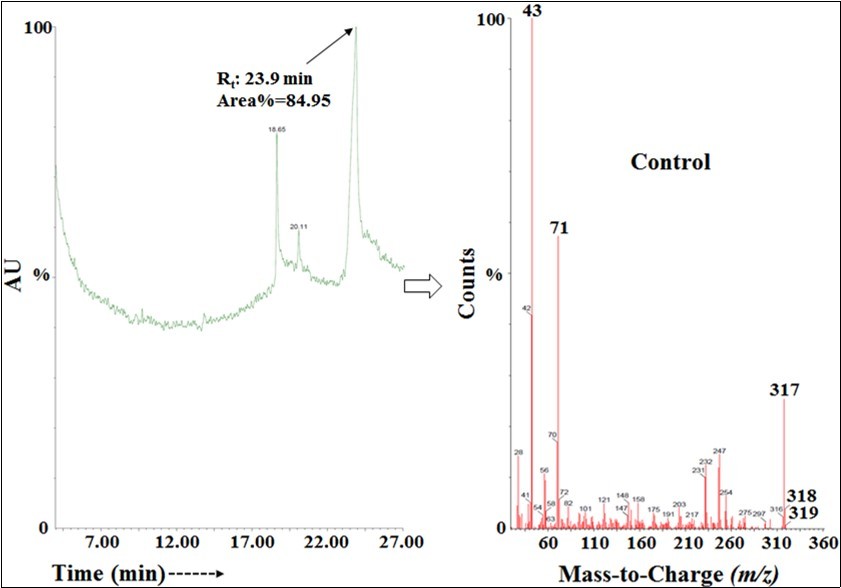 Figure 5. The GC-MS chromatogram and mass spectra of the Biofield Energy Treated ofloxacin. 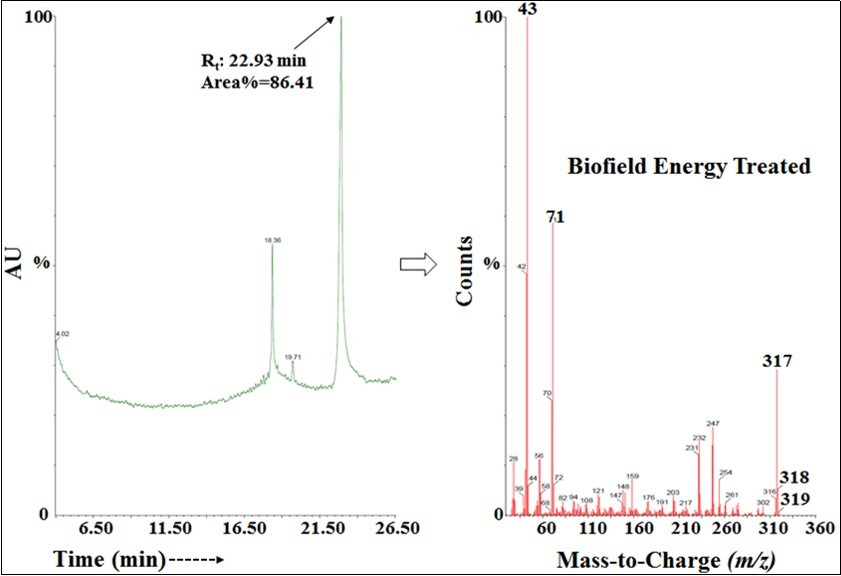 The LC-MS and GC-MS based isotopic abundance ratio of PM+1/PM (2H/1H or 15N/14N or 13C/12C or 17O/16O) was significantly increased compared to the control sample. The increased in isotopic abundance could be due to changes in neutron to proton ratio in the nucleus possibly through the interference of neutrino particles via the Trivedi Effect®9, 10. The neutrino is electrically neutral and the mass is so small. It interacts protons and neutrons in the nucleus via the weak subatomic force and gravity, which indicated a close relation between neutrino and the isotope formation 10, 28, 29. According to Ben Xu et al. 2018, reported that varying the isotopic ratios of 13C : 12C can change the relative positions and intensities of infrared-active vibrational modes of atoms in a non-linear and mode-dependent fashion 32. In this experiment, the Biofield Energy Treated ofloxacin has increased the isotopic ratios by 22.43% as compared to the untreated ofloxacin. Based on the findings, authors assumed that the Biofield Treated ofloxacin could be influence the atomic bond vibration. As per literature reported that, accumulation and/or concentrate of heavier isotope that trends to strongest bond 33. Based on the findings, authors assumed that the Biofield Energy Treated ofloxacin may increase the intra-atomic bond strength, and that leads to increase its physical stability. The new form of treated ofloxacin would be more stable, better soluble, and bioavailable compared to the control sample, which was also supported by the recently published article 7. It would be more useful to design efficacious pharmaceutical formulations that might offer better therapeutic response against infections in the urethra, urinary tract, gonorrhea, pneumonia, infectious diarrhoea, bronchitis, cellulitis, bacterial infection of the eye and ear, multidrug-resistant tuberculosis, prostatitis, otitis media, plague, etc.

The authors are grateful to Sophisticated Instrumentation Centre for Applied Research & Testing (SICART) India, Trivedi Science, Trivedi Global, Inc., Trivedi Testimonials, and Trivedi Master Wellness for their assistance and support during this work.